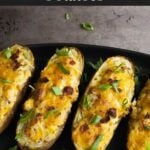 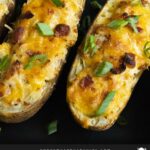 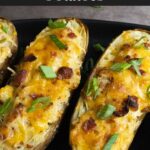 While I am a huge fan of baked potatoes as a side to any robust protein, such as steak or pork, sometimes it’s fun to jack it up a bit. Twice-baked potatoes take a baked potato up a few notches. And when I say a few, I am talking from good to GREAT!

If you have never done this, you have to try it. It’s always a treat and kicks what can be a decent meal into a spectacular one! All those wonderful textures and flavors in every bite. It’s a winner!

How To Make Twice Baked Potatoes

This twice baked potatoes recipe is very easy to put together but does take a bit of time as we’re baking potatoes. But other than that, it’s just a matter of adding all your ingredients together and putting them back into the oven.

Chances are you already have these ingredients which makes this a great go-to recipe. You will need the following

When the oven hits temperature, place the potatoes in the oven and allow them to cook for approximately 1 hour (up to one hour and 30 minutes) or until a butter knife can easily pierce through the potato.

While the potatoes are cooking, in a skillet cook the bacon until it reaches your preferred doneness. Remove from the skillet, drain on paper towels, and set aside.

Add the whites of the chopped green onion to the bacon fat and cook over medium to medium-low heat until the white of the green onions is translucent. Reserve the green part of the onion for garnish. Add the garlic and cook for 1 more minute making sure the onion and garlic do not burn. Pour the onion, garlic, and bacon fat into a small bowl or ramekin and set aside.

The bacon at this point should be cool enough to handle. Chop into small pieces and bits and set aside.

When the potatoes are ready, remove them from the oven. Using a potholder or oven mitt to handle the potatoes, cut each potato in half lengthwise. Using a spoon, remove the potato flesh and place it into a mixing bowl. Make sure to leave approximately 1/4″ of the potato along the shell to maintain its structure.

In the mixing bowl using a fork, mash the potatoes until sufficiently fluffy. Add the melted butter and the onion-garlic bacon fat mixture to the mixing bowl.

Next, add the bacon, the sour cream, and the parmesan and cheddar cheeses. Reserve a few sprinkles of the bacon and cheeses for later.

Mix together until well combined. Spoon the mixture back into the potato shells evenly. Sprinkle remaining cheeses and bacon over the potatoes and return to the oven.

Continue to bake until heated throughout, approximately 15 minutes, and remove from the oven.

This recipe is great when you want to mix things up a bit. Sometimes our menus can get a little stale.

We have made these potatoes for decades. We don’t do it often because, to be honest, we forget. We forget how easy it is and we forget how damn tasty it is.

It’s only after one too many regular baked potatoes does the bulb go off and we’re like “hey, what about twice-baked?” and the mixing bowl comes out and I get excited all over again.

This will please them all. If you want vegetarian, leave out the bacon. If you need to feed a larger crowd, double the recipe. This is a great go-to recipe that won’t fail you.

You can pair this with whatever you like, but I find that beef and potatoes go great together. Take a look at our prime rib roast and tell me this potato dish wouldn’t go great with it!

You might also want to take a peek at our Potatoes Au Gratin With Gruyere. They’re fabulously decedent!