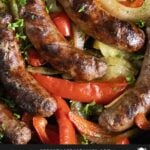 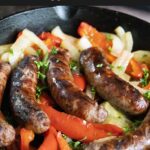 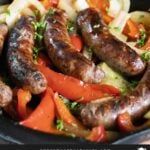 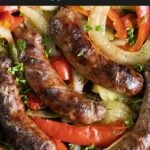 Step up the grill game with some delicious grilled brats braised in peppers, onions, and beer! The flavors are amazing!

Grilled beer brats are a great way to mix up the grill game, I said it. Hamburgers, hot dogs .. of course. But why not just take a step further, mix it up just a bit, and bring some explosive flavors to the picnic table!

This recipe is so easy and the rewards of the great flavors will have you kicking yourself for all the missed opportunities that you had in the past. Grilled brats are very tasty, these take it a step further!

The crispiness and flavor of the beer brat mixed with the sweetness of the peppers and onions goes together so well. And when you put it all together on a steamed bun … man o man, super goodness.

How To Make Grilled Beer Brats With Peppers and Onions

What Do I Need?

This recipe is super easy and comes together in about 30 minutes. You will need a few things:

To start, slice the onions and peppers. We recommend slicing the peppers and onions relatively thin so when you’re eating your brat, you’re not trying to wrangle a big bite of pepper or onion.

Place the sliced vegetables in a bowl and add 1 tablespoon of oil. You can use any kind of oil you like, we used olive oil. Toss in a couple of dashes of salt and pepper as well.

Startup the grill and toss on the cast iron skillet. While that is heating up place the brats on the grill over direct heat and give them a good char all around. This takes about 5 minutes.

When the skillet is nice and hot, and it should be after 5 minutes, add the onions and peppers and brats to the skillet and pour the beer in.

A note on the beer: use a light summer beer vs something really hoppy. We used Samuel Adams Summer Ale and it was fabulous. We also considered using Blue Moon, which would be pretty darn tasty as well.

When you pour the beer in, depending on the size of your skillet, you might have to pour in half, then add the other half once it calms down due to the heat of your skillet.

Cover with a lid or some aluminum foil and allow to cook over medium heat for 15 to 20 minutes. The peppers and onions should be fully cooked and the beer should be reduced until it’s almost gone.

Using some pot holders, remove from the grill and serve immediately. Place the brat in a bun and top with the peppers and onions and any other toppings you choose.

The beer that you decide on gets absorbed into the brats and vegetables and you can taste the hints of it. It really was amazing and this will happen every time going forward.

I will definitely play around with the various beers out there to see what other flavor combinations can be had. This is a great brat recipe that can be played with and tweaked to your particular tastes.

Hope you try it, you won’t be disappointed! Time for lunch, and I am going for leftovers!

We also have a great turkey burger recipe that might interest you. Check it out, it’s awesome! 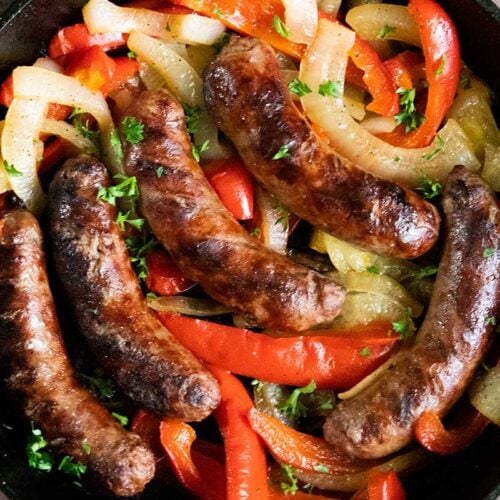